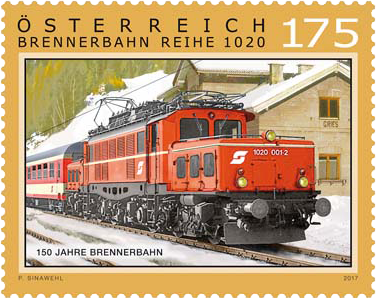 Austria – One of the most important links from Germany to Italy via Austria is the railway line over the Brenner Pass, the standard gauge Brenner railway. On the occasion of the 150th anniversary of its opening in August 1867, Austrian Post is dedicating a commemorative stamp from the “Railways” series to it.

The section of the railway from Munich to Verona which runs over the Brenner Pass from Innsbruck to Bolzano is called the Brenner railway, or in Italian Ferrovia del Brennero. It creates a link between the imperial North Tyrolean railway (Kufstein- Innsbruck), which opened in 1858, and the imperial South Tyrolean railway (Verona- Bolzano), which began operating in 1859. The stretch from Innsbruck to Bolzano is around 125 kilometres long. The maximum incline is 2.5% and the maximum speed of the trains is 100 km/h on the North Tyrolean side, a little over this in South Tyrol.

The Brenner railway was planned and constructed under the engineer Carl von Etzel of the k. k. priv. Südbahngesellschaft (imperial private Southern railway company).
In contrast to the recently opened Semmering railway, as few tunnels and bridges as possible were built in order to save on costs, with the steep valley slopes at
St. Jodok and Gossensass being negotiated by means of spiral tunnels instead. It was also more cost-effective to lay the railway on the river bed at Matrei and Gossensass (Sill and Eisack) and to put in a tunnel for the waterway. At an altitude
of 1,371 metres above sea level, the Brenner Pass station is the highest point on the railway and is now the border station between Austria and South Tyrol, although most of it belongs to the South Tyrolean municipality of Brenner. Here the engines have to be changed due to the different electrical systems used by the Austrian (alternating current) and the Italian (direct current) railways. Nowadays modern engines are able to use a range of electrical systems and no longer need to be changed. Brenner Sta-tion acquired historical significance during the Second World War as Adolf Hitler and Benito Mussolini met there for political talks on multiple occasions.

For some years now, work has been underway on the 55 kilometre-long Brenner
Base Tunnel, which will take freight traffic off the existing stretch and make the whole stretch faster as part of the Trans-European Transport Network system (TEN-T). Goods trains have already been using the alternative route via Innsbruck with the
13 kilometre-long Inn Valley Tunnel since 1994 in order to reduce noise pollution in the Lower Inn Valley. The building of the Brenner Base Tunnel will incorporate this deviation as well as the high speed stretch in the Lower Inn Valley, thus making the Scandinavia-Mediterranean (SCAN-MED) railway link considerably faster. The tunnel is expected to be operational in 2026. The already considerable freight traffic over the Brenner route is largely operated by private railway companies.

The stamp design shows a typical passenger train from the 1980s with an Austrian Railways 1020 series electric engine in a snowy Gries station. On the Austrian side the area around the Brenner Pass belongs to the municipality of Gries am Brenner. 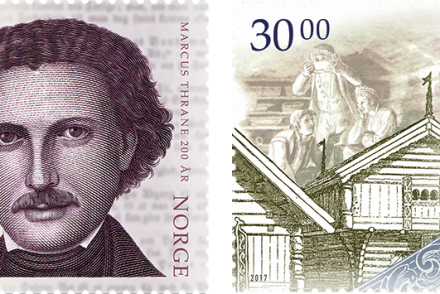 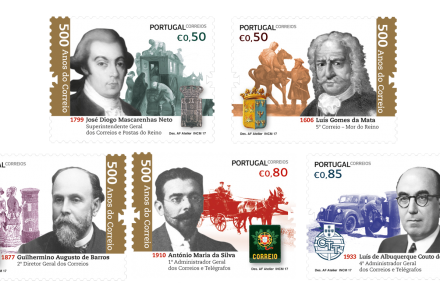 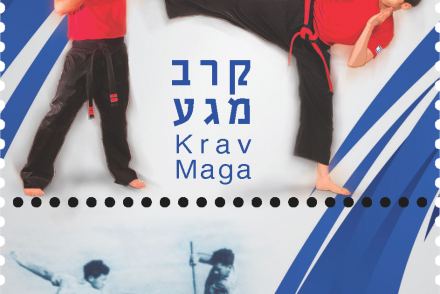