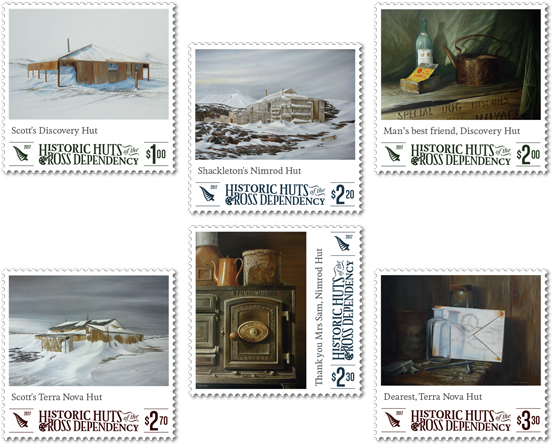 New Zealand Post has teamed up with the Antarctic Heritage Trust and artist Sean Garwood to produce some stunning stamps. They feature Sean’s paintings and celebrate the historic huts of Antarctica and the incredible men who built them.

Captain Robert Falcon Scott and Sir Ernest Shackleton have had their names and their achievements forever immortalised in history. The heroic feats of both of these men helped to pave the way for future exploration and study of the icy continent in the Geographic South Pole. The huts left behind from their various explorations have now been taken into the care of the Antarctic Heritage Trust. A plan was made to restore and conserve the individual huts, each one needed weatherproofing and repairs of some sort. Terra Nova being the largest of the three huts took seven years to be fully repaired, and all of its 11,000 artefacts conserved.

Ongoing funding has been set up to ensure the prolonged protection and preservation of these incredible reminders of historic exploration achievements.

Scott established this base for the National Antarctic (Discovery) Expedition 1901–1904. It was the first hut to be erected on Ross Island and became an important staging post for every subsequent heroic-era expedition. Built of Douglas fir and Scots pine, it was designed in Australia and resembles an outback house with large verandas. The hut turned out to be too hard to heat so the men lived aboard the Discovery and used the hut for scientific observations and other work.

A nip of Cognac would undoubtedly have been welcome after being out in the harsh Antarctic environment. The hut was used to store supplies for the 47 men and their animals. Spratt’s dog biscuits, preserved cabbage, mutton carcasses, baking powder, oatmeal, gooseberry jam, cocoa, and split peas were just some of the still preserved items found during conservation work on the hut. Many of the provisions had been taken on board in Lyttelton, the New Zealand port from which Discovery sailed for Antarctica.

Prevented by thick sea ice from reaching Ross Island’s Hut Point, he settled for this site, 32 kilometres further north. The men built the hut in just 10 days. Made of fir, it was pre-fabricated in London and was able to be insulated with cork. It was sited in a sheltered area below a ridge of volcanic rock, with Mt Erebus towering over it in the distance.

Mrs Sam’s stove was kept going 24 hours a day and provided enough heat to keep the temperature inside the hut at 16–21 degrees Celsius. The stove burned anthracite coal and used less than 254 kilograms per week. It certainly improved the men’s living conditions, making it possible to provide hot meals and fresh bread every day, hot baths, and the ability to dry their clothes. Sufficient ice could be melted for the daily needs of the men and the ponies.

The Terra Nova Hut at Cape Evans (named after Scott’s ship) is from where Scott and his Polar Party departed in their quest to be the first to reach the Geographic South Pole. Scott reached his goal only to find that the Norwegian explorer Roald Amundsen had got there first. This is the largest of the historic huts and it has come to symbolise the hardship and heroism of early Antarctic exploration.

The expedition had its own post office, approved by the New Zealand Post and Telegraph Department, but letters were collected and delivered only once a year, when the ship returned from New Zealand after the winter. Expedition members often wrote letters back home. Family and friends were told about day-to-day life, whereas business partners and scientific advisers were sent updates on the progress of the expedition. The embossed, printed crest on this envelope reads: ‘British Antarctic Expedition Terra Nova R.Y.S.’

In the top right hand corner of the miniature sheet, Captain Robert Scott’s ship from the 1910 expedition the Terra Nova can be seen battling its way through the turbulent Southern Ocean. The ship came very close to being lost when the crew encountered a ferocious storm. The already overloaded ship was struggling greatly with handling and buoyancy. The 25 year old ship had a tendency to take on water, a situation made much worse by the momentous waves crashing across the deck. Cargo was being washed overboard or battered around the deck, one of the dogs, Osman, became somewhat of a legend after being washed overboard by one wave and then dropped back on deck again by the next.

The presentation pack contains detailed information about each hut and each painting used in the stamps. The full image of each painting featured in this stamp issue can be seen with its name beneath it. Quotes from Scott and Shackleton’s wife give an inside look into the real struggle the men faced while they were living on the ice.

Whether you’re an avid collector of all things Antarctica or simply appreciate incredible works of art, this detailed pack will make an amazing gift or edition to a pre-existing collection. 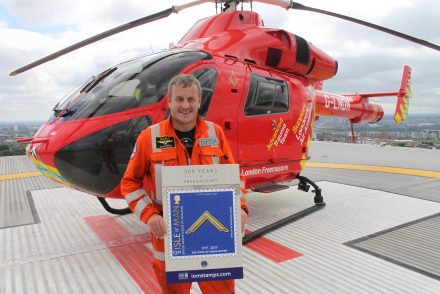 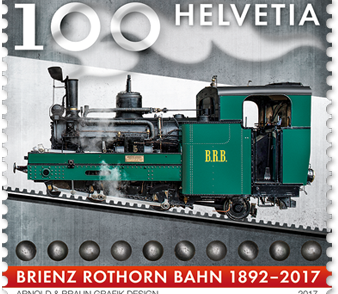 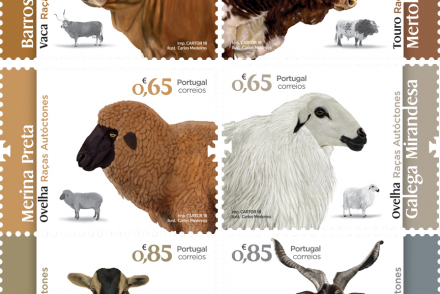