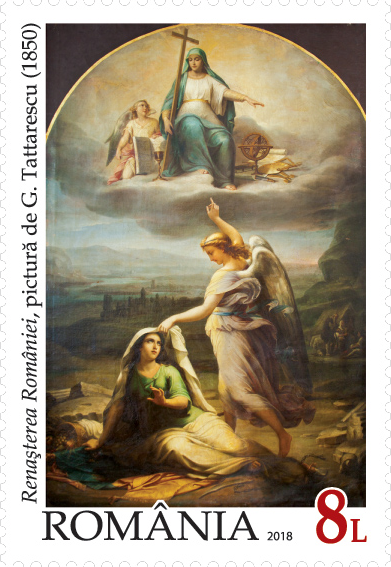 The Romanian Renaissance in Painting

February 21, 2018 Stamps Comments Off on The Romanian Renaissance in Painting 2023
BUY NOW ON WOPA+

Romania – With the occasion of the 170th anniversary of the 1848 Revolution, Romfilatelia introduces into circulation the postage stamp issue “The Romanian Renaissance” in painting.

On the stamp with the face value of Lei 8, is reproduced the painting The Romanian Renaissance, by Gheorghe Tattarescu.

This year marks the 170th anniversary of the 1848 Revolution which represented the cornerstone of Romania’s birth. It was the moment when artists and intellectuals acknowledged the community of language and culture of the territories inhabited by Romanians and began to militate to forge a unitary state. The national feeling was built even through the works of the painters of the 1848 movement, who were inspired by the artistic movements fashionable at that time in the great cities of Western Europe.

One of the most important representative painters of the 1848 movement was Gheorghe Tattarescu (October, 1820, Focsani – October 24, 1894, Bucharest). He was the nephew of the church painter Nicolae Teodorescu, his first tutor in the art of church painting, who, in 1831, founded in Buzau a school for church painting, where the great future painter enrolled as a student, at the age of 11. As a child, the artist painted churches along with his uncle, and was remarked by the Chesarie Bishop of Buzau, who offered him, in 1845, a scholarship in Rome. He completed his studies in the revolutionary atmosphere of the 1848 movement in Rome, and his first works had a powerful national charge. The Italian education also distinguished itself through the influences manifested in his work by the Christian iconography.

The artist returned to the country at the half of the 19th century. During that time, he was one of the most important churches’ painters. Over 50 places of worship bear the mark of the maestro, among which the Church of St. Spiridon, the Metropolitan Cathedral in Iasi, the Greek Church of Braila, the Church of the Ciolanu monastery in Buzau, the White, Zlatari, Coltei, Cretulescu, Enei, St. Spiridon churches and the Lady Elena Hospice in Bucharest etc.
Gheorghe Tattarescu also preoccupied himself with the foundation of a Romanian artistic school. Together with Theodor Aman, he founded, in 1864, The National Fine Arts School. He worked together with his students, especially on church paintings.

The artist lived the political and cultural atmosphere of the time to the fullest. He is the author of memorable portraits of the leaders of the 1848 movement, like Nicolae Balcescu, Gheorghe Magheru or Stefan Golescu.

In 1848, when he was in Italy, he started to work on an artistic project dedicated to the national ideal. Gheorghe Tattarescu exhibited the work for the first time in Rome, in 1850. “The Awakening of Romania” signifies the rebirth of the country through science, art and faith. The composition is distinctly accomplished in two planes. On the lower side, a woman wakes up from her sleep, a symbol of Romania’s birth who breaks free from the chains of slavery, next to the partially unfolded Romanian flag. Further down on the left side, there is the horn of abundance, and on the right side, by contrast, a poor peasant family in front of a hut. An angel lifts the veil of obscurantism, pointing towards the upper plane to the personified symbols of science, art and faith. The Danube, the Carpathians, and the ruins of the former Romanian capital, Targoviste, all figure suggestively in the background of the composition.

Tattarescu offered the painting to the Barbu Stirbei ruler, who, impressed by the gift received, founded The Gallery of Paintings. The first piece of the collection, donated by the ruler, was Tattarescu’s own painting. In the meanwhile, the Gallery was transformed in the State Pinacotheque, and later on, in the National Museum of Art.

Gheorghe Tattarescu’s body of work, today found in the patrimony of the Bucharest Municipality Museum, had several names. Initially, the author mentioned the canvas by the title “Romania’s Awakening”. But, in 1867, when the artwork was sent to Paris, at the Universal Exhibition, it was renamed “Romania’s Dream”. In 1953, when the Memorial House “Gheorghe Tattarescu” was founded, his work entered the patrimony of the Bucharest Municipality Museum with the title “The Renaissance of Romania”.

On the stamp of the imperforated souvenir sheet of the postage stamp, with the face value of Lei 15, is reproduced an old age penciled portrait of Gheorghe Tattarescu. The illustration is probably an intermediate version of the Self-Portrait on canvas, finalized in 1875.

Romfilatelia thanks the Bucharest Municipality Museum for its documentary and photographic support given for the creation of this postage stamp issue. 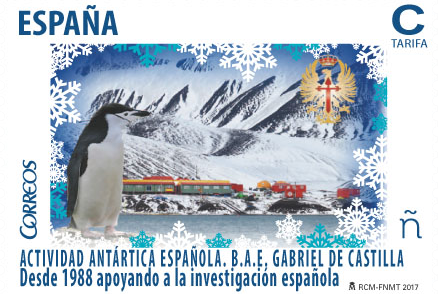 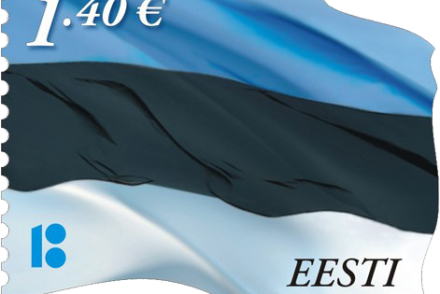 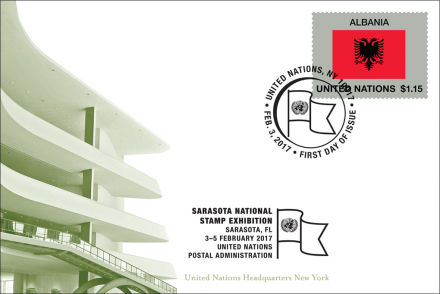